OK Seed Mark has been launched! 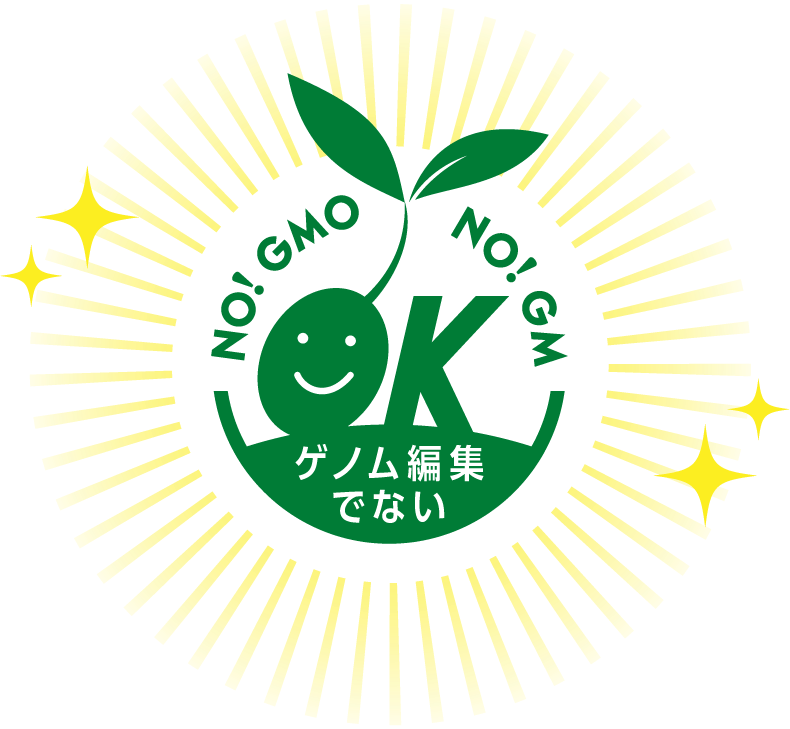 Following the cultivation of gene-edited soy beans in the USA in 2018, and the distribution of its soybean oil starting in 2019, Japan initiated the distribution of the first gene-edited tomato seedlings in May of this year. Later in the year, the Japanese government announced its Green Food System Strategy, which highlights the further use of gene-editing technology to develop new varieties.
As a response, a significant number of Japanese citizens have voiced concern. Citizens are aware that researchers from around the world have expressed concern about the safety of applying gene-editing technology to food(1). Regardless, the Japanese government argued that “gene manipulation by gene-editing is different from GMO technology and is indistinguishable from processes of natural mutation”, and allowed its distribution without conducting safety inspections or applying any labeling requirements(2).

Anxieties about gene-edited food grow
Gene-editing technology is useful for investigating gene function and for this, the technology has even received the Nobel Prize in Chemistry. However, concerns have been voiced around the effects of gene-edited organisms being released into the environment, and the irreversible damage it can cause on the ecosystem. The use of this technology should be confined to experiments in the laboratory.
While the government maintains its claim that it is safe to apply gene-editing technology to food, there are reports of off-target effects where un-targeted genes are mistakenly destroyed, or, even when the targeted genes are destroyed, unintended mutations occur, or unexpected proteins are produced(3).  Moreover, there are concerns around the insertion of antibiotic-resistant genes which are used to confirm the success or failure of the manipulation. While such genes are supposed to eliminated, there are concerns about their persistence. Despite health concerns around the ingestion of such substances, no experiments have been conducted to confirm their safety, claiming that “gene-editing is no different from mutations that occur naturally”.
Perhaps the biggest problem is that the production and distribution of gene-edited foods are being allowed without any form of labeling requirement. Because there are no labeling requirements for seeds and seedlings, there is no way for consumers to know whether they are purchasing and then cultivating gene-manipulated crops or not. If nothing is done now, it will become impossible to distinguish between gene-edited and non-gene-edited foods in Japan, and both producers and consumers will be stripped of their right to know about and choose their food. The government should make it compulsory to label seeds and food products that have been genetically manipulated.

Labeling is possible! - From Seeds to All Foods
The Japanese government has confirmed that seeds and food products can be labeled as "non-gene-edited" if there is solid proof to back-up the claim(4).  If seeds can be labeled as "non-gene-edited", then the crops and processed foods that results from the seeds can also be labeled, making it possible to protect the entire food chain. We should, therefore, start with seeds.
After careful consultation with seeds producers, farmers, processors, and consumers who are interested in food safety, a collective decision was made to create the OK SEED Mark, a voluntary labeling of seeds, seedlings and foods as non-gene-edited. The OK SEED Project was initiated to promote this initiative.
The OK SEED Mark can be used free of charge though the registration is required. Looking ahead, we would like to create opportunities for people to learn about the issues around gene-edited food, and expand and protect people’s right to choose by spreading the OK SEED Mark throughout Japan.
We hope that many people involved in seed production, food production, and distribution, as well as all consumers will use and spread the OK SEED Mark. Please join us in the OK SEED Project, and use the OK SEED Mark.

Go to the top